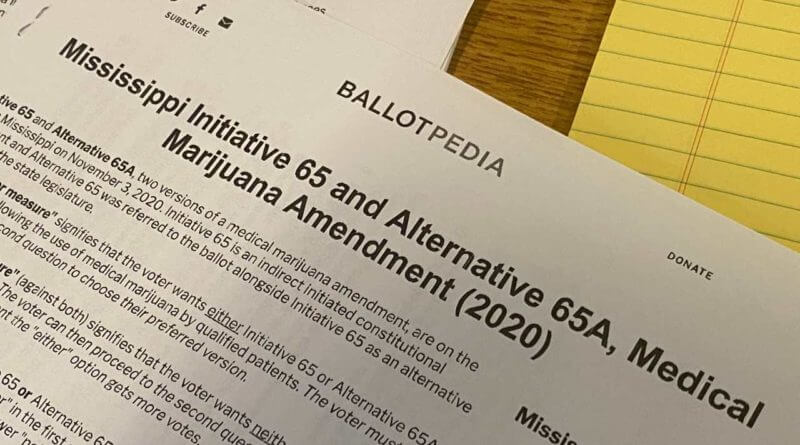 Both associations are urging citizens to vote against the initiative for a myriad of reasons.

The press release can be found below.

Measure No. 65 this November. The measure would require the Mississippi State Department of Health (MSDH) to take on the responsibility of a new agriculture program as well as oversee the distribution of a substance that is illegal under federal law. In addition to longstanding concerns about the lack of rigorous medical evidence to support cannabis for medicinal use, the MSMA and AMA agree with state health officials that Initiative 65 would cause immediate harm to the state’s public health mission without any public health benefit.

“It’s no secret that the State of Mississippi works overtime to try and effectively provide public health resources to our most vulnerable citizens,” said Thomas Dobbs, MD, the state public health officer. “Initiative 65 would inappropriately require us to divert already-limited resources for the benefit of an incredibly complicated industry. Fees and charges generated would only be available to support the marijuana program. No revenue would be available to support the state, communities or public health efforts.”

“Physicians advocate for evidence-based solutions,” said MSMA President Mark Horne, MD. “When we were asked to review Initiative 65, it was immediately clear that this is an effort focused on generating profits for an industry that has no ties to the medical or health care community in Mississippi. That is just one of many red flags that makes a NO vote essential.

Randy Easterling, MD, a past president of MSMA and its representative on the AMA Cannabis Task Force, reaffirmed the dangers of Initiative 65 by explaining the lack of scientific evidence supporting the effectiveness of cannabis for medical use. “Of the many diseases and ailments listed in Initiative 65 where ‘medical marijuana’ could be used as treatment, there is little to no credible scientific evidence establishing this as a trusted alternative to FDA-approved pharmaceuticals. Without the rigorous testing of medications, using unverified treatment options poses a great threat to those patients needing reliable relief for their condition.”

“Amending a state constitution to legalize an unproven drug is the wrong approach,” said AMA President Susan R. Bailey, MD. “Early data from jurisdictions that have legalized cannabis are concerning, particularly around unintentional pediatric exposures that have resulted in increased calls to poison control centers and emergency department visits, as well as an increase in traffic deaths due to cannabis-related impaired driving.”

Drs. Dobbs, Horne, Easterling and Bailey all pointed to the fact that the U.S. Food and Drug Administration (FDA) has approved several cannabinoid-containing products, but Initiative 65 would open the door for Mississippians to use nearly any product without FDA safety review. The organizations emphasized that scientifically valid and well-controlled clinical trials conducted under federal investigational new drug applications are necessary to assess the safety and effectiveness of all new drugs, including potential cannabis products for medical use.

About the Mississippi State Medical Association

The Mississippi State Medical Association is the largest physician advocacy organization in Mississippi, representing nearly 5,000 physicians and medical students. Since 1856, MSMA has been a trusted health policy leader and professional development resource for physicians, representing the unified voice of physicians statewide on state and federal health care issues while providing information needed to navigate health care legislation and regulatory changes.