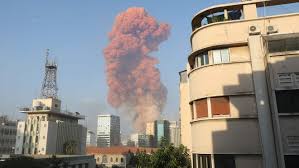 Tragedy struck today in Beirut as mysterious blasts occurred that has claimed the lives of ten people and sent hundreds more to medical centers.

Officials report that they believe plenty more are still trapped under heaps of debris that has piled up at the site of the port’s explosions.

The cause and perpetrator of the blasts has yet to be determined, but Major General Abbas Ibrahim, of Lebanon’s General Security Directorate claimed the explosions were caused by confiscated highly explosive materials.