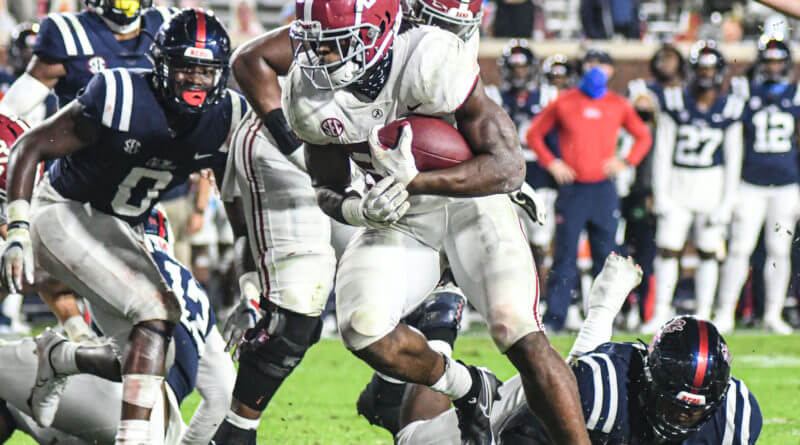 All the hype from Lane Kiffin vs. Nick Saban lived up to the promise as the Alabama Crimson Tide defeated the Ole Miss Rebels in a 63-48 shootout that was closer than the final score indicated.

Kiffin’s Rebels got off to a fiery start with a jump pass from Matt Corral to Kenny Yeboah 54 seconds into the game to give Ole Miss the early lead.

As it would happen all night, Alabama responded. Mac Jones began a fantastic game with a 14-yard touchdown pass to Devonta Smith, who scored five touchdowns on the Rebels last year in Tuscaloosa.

The Rebels would be forced to punt, but Najee Harris fumbled for the first time in his career at the goal line. Ole Miss took advantage of the opportunity and retook the lead on a three-yard run by Jerrion Ealy.

Of course, Saban and company responded quickly with a Brian Robinson Jr. touchdown run from a yard out.

Matching rushing touchdowns by both Ole Miss and Alabama sent the game into the halftime break tied at 21. One key was Lane Kiffin deciding against pushing for another score with a minute left and all three timeouts.

The Crimson Tide started the half with the football, and it was the key to putting Alabama back into the driver’s seat.

They struck first in a sequence of six straight touchdowns stretching into the early fourth quarter that left the score at 42-42.

Kiffin looked to pull off a major gamble with an onside kick that was unsuccessful and gave the Crimson Tide excellent field position.

Kiffin talked about the gamble postgame.

“We weren’t stopping them so what’s the difference of giving them the ball on the 50.”

From that point, the Rebels could not manage another touchdown, and Alabama kept rolling to a 63-48 victory.

Ole Miss dropped to 1-2 and travels to face Arkansas next week. Alabama stays unbeaten at 3-0 and will face Georgia at home next week.