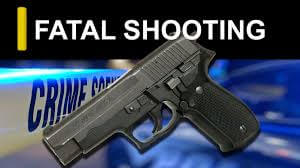 Ten people were shot with two of them being fatally injured at a post-funeral gathering in Greenwood over the weekend.

Jonathon Pitts, 42, and sister Katrina Pitts, 41, were the two victims found dead at the scene of the shooting on Saturday.

The Pitts were in from Chicago, along with other family, to attend the funeral of their grandmother. No suspect has been arrested as of Monday.

Authorities suspect a semi-automatic rifle was used as they found shell casings from an AR-15 at the scene.