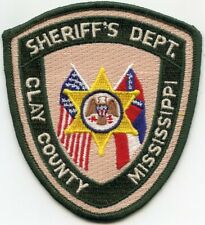 Public Service Commissioner Brandon Presley has announced that he is suggesting an investigation on cell phone service provider AT&T after Clay County Sheriff’s Office had their services through the company disconnected.

Presley issued a statement on the matter on Twitter, and it can be found in full below.

“I have been informed by Sheriff Eddie Scott that the Clay County Sheriff’s Office and Emergency Management Agency have been without their 911 and law enforcement terminals since September 28th due to a billing error by AT&T. Since that day, Clay County law enforcement officers have been unable to run tag numbers. driver licenses. checks for warrants, receive or send safety alerts, or other tasks vital to performing law enforcement duties, even including running required background checks for the U.S. Department of Defense.

Sheriff Scott is in possession of records that show that Clay County has paid every bill rendered to them by AT&T, yet AT&T disconnected their service and refuses to reconnect them. AT&T’s acts in this situation are egregious. I request the Public Utilities Staff fully and immediately investigate this matter and report its findings to me. The safety Of Clay County’s law enforcement Officers and citizens should not be in danger due to continued incompetence by one of the largest telecommunications carriers in America.

I request that the Public Utilities Staff, in conducting its investigation, apply all appropriate Mississippi law and rules of the Public Service Commission. Lastly, if needed, I stand willing to issue any needed subpoenas for testimony Or records that you may need in carrying out this request. Because Of the dangerous nature of this matter, I ask that you please conduct this investigation immediately. I am also, by way of letter, calling upon AT&T’s CEO Mayo Flynt to immediately restore service during the time that these bills are in dispute.