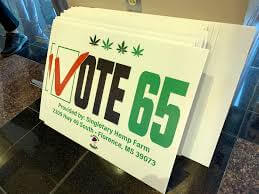 Medicinal marijuana was supported by the majority of Mississippians in November’s general election with the passing of Initiative 65.

However, it’s passing will bring nothing to fruition.

The Mississippi Supreme Court struck down the initiative‘s passing on Friday after it was reviewed by the state’s highest court.

After it seemed the law would be passed, an appeal was filed to delay and possibly prevent the initiative’s passing.

The law was struck down due to a technicality in the state’s constitution that states equal representation in the initiative’s signatures must come from the state’s five congressional districts.

However, since 2000, Mississippi has only had four congressional districts. Because of this, the defendant argument that only 80 percent of the necessary signatures was reached and led to the successful appeal.

Time will only tell how this newly found loophole will prevent or affect other ballot initiatives.

To read the full court document on the outcome, visit: