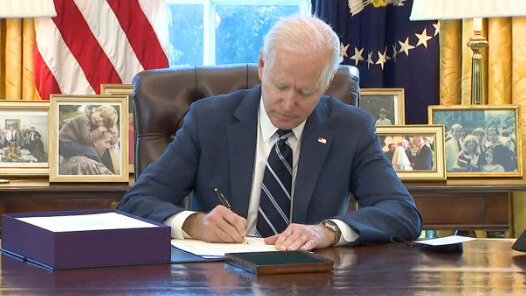 Relief is on its way.

On Thursday, President Joe Biden officially signed off on the $1.9 trillion “American Rescue Plan” after passing through Congress earlier this week.

Biden was originally expected to sign the bill on Friday; however, the bill made its way onto the desk in the Oval Office one day earlier than expected.

The plan provides funds in many different ways to help Americans combat the virus.

The biggest news of the bill is the $1,400 stimulus checks that will be distributed to citizens. Some may see these payments appear as early as this weekend.

Along with it, federal unemployment benefits were extended and millions of dollars were placed into funding for vaccine distribution.

Biden has stated many times that one of his top goals is to see 100 million Americans vaccinated in his first 100 days in office.

A Tweet that shows the president signing the bill into law can be seen below.