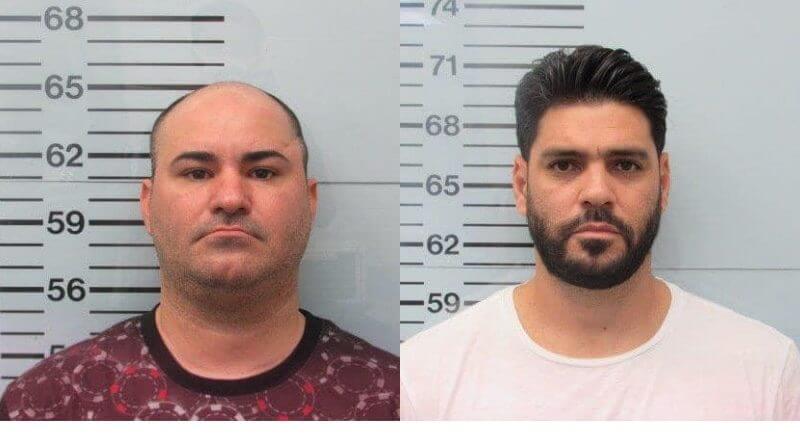 From the arresting agency:

On January 25, 2020, the Oxford Police Department received a report of credit card fraud from a concerned citizen still in possession of his actual bank card. Over the next seven months, more victims came forward reporting similar incidents. Video evidence obtained during this investigation showed two males were working in tandem with each other by withdrawing money from ATMs at gas stations and banks using counterfeit cards.

Investigators determined that the suspects traveled in a different vehicle each time, they stayed for a short period, committed their crimes, and left the area. Even though the suspects tried to hide their identities, investigators eventually identified them.

On August 1, 2020, members of the Criminal Investigation Division coordinated with the Southaven Police Department to apprehend Olvein Botell-Gonzalez, 33, of Miami, Florida, and Francisco Menendez-Baldomero, 36, of Miami, Florida, after they crossed into Mississippi from Tennessee. Once in custody, Oxford Police investigators transported them back to the Lafayette County Detention Center, along with their rental van.

A search of the van and their persons revealed a large sum of cash, many counterfeit credit, debit, and gift cards, and a set of keys used to unlock gas pumps. Investigators identified the location of where both males were staying in Tunica, Mississippi, and executed a search warrant at that location, uncovering several additional electronic devices used to capture credit card numbers and manufacture counterfeit cards.

We would like to thank our federal partners, Southaven Police Department, the Mississippi Analysis and Information Center and the Tunica County Sheriff’s Department for their assistance in this case. These cases can be very difficult to solve and we could not have brought these men to justice without the help of these agencies! We are thankful for the hard work of our law enforcement officers who prevented continual financial loss to the residents of Oxford and Lafayette County.