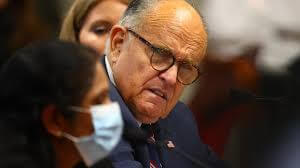 Giuliani has been traveling frivolously across the nation in an attempt to win multiple legal battles that could possibly shift the presidential election into Trump’s favor.

Most recently, the former mayor of New York City has been at the capital of Georgia in Atlanta attending a Senate meeting revolving around the November election.