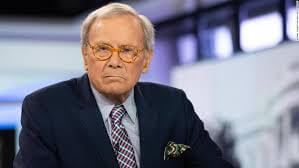 On Friday, the legendary news anchor Tom Brokaw announced his upcoming retirement after 55 years on the air at NBC.

Brokaw is the only broadcaster to lead all three major news broadcasts at NBC: “TODAY”, “Nightly News”, and “Meet the Press.”

“During one of the most complex and consequential eras in American history, a new generation of NBC News journalists, producers and technicians is providing America with timely, insightful and critically important information, 24/7,” Brokaw said in a statement. “I could not be more proud of them.”

Brokaw leaves his post as one of the most distinguished anchors in American history. In 2014, President Barack Obama awarded him the Medal of Freedom, the highest honor a citizen can receive.