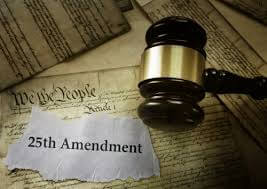 In a press conference on Thursday, Speaker of the House Nancy Pelosi informed press members that the 25th amendment will be discussed on the house floor on Friday.

“Tomorrow, by the way, tomorrow, come here tomorrow. We’re going to be talking about the 25th Amendment,” said Pelosi.

The 25th amendment sets the guidelines and foundation over presidential transfer of power. The amendment has been invoked four times in its history and never used to permanently remove a president from power.

“The president is, shall we say, in an altered state right now. I don’t know how to answer for that behavior.”

Many have called for the discussion of invoking the 25th amendment after President Donald Trump’s positive testing for COVID-19 and the lack of details provided about his recovery.

If invoked, Vice President Mike Pence would be next in line to receive presidential powers. A two-thirds majority must be found in both chambers of Congress to move the measure forward.