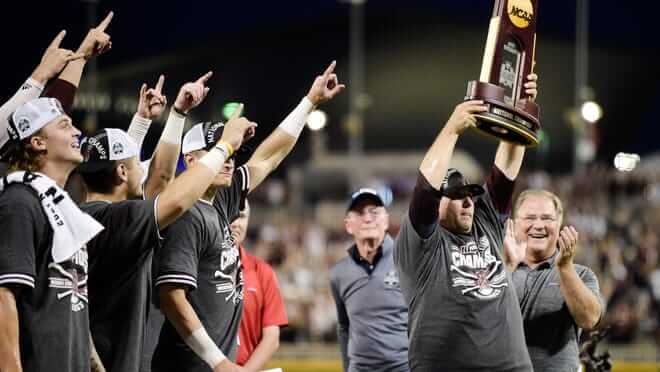 Mississippi State made their first College World Series appearance in 1971. Two days ago, the Bulldogs won their first ever National Championship. The win was their 50th of the season and it just happened to be on the 50th anniversary of that first Omaha team. There’s a lot of superstition in baseball, for whatever reason, but there didn’t seem to be anything that would stop these Bulldogs from winning it all. It was like it was their destiny.

The Bulldogs have been on the big stage before. They’ve made 3 consecutive trips to the CWS and 12 overall. However, as much history and tradition State has had in baseball, there was one thing they have never accomplished – a national championship.

There have been many great teams and seasons at Mississippi State through the years. Many great coaches and players, too. None of them were able to finish as the top team in college baseball, but this 2021 team of Bulldogs found a way.

State did everything the right way. They were fun to watch and represented the best of amateur athletics. This past week, the Bulldogs became America’s team. Not only were MSU fans pulling for their favorite team, but nearly every other fanbase in the country was rooting for the Omadawgs. That night I received a message from someone who lives in Pennsylvania. He was telling me that he and his family were all watching the game, and wanted me to know that his grandson (No affiliation to MSU – they’re Penn St people) was jumping up and down in excitement watching the Bulldogs.

I’m not sure we can truly understand the impact this past week will have on the program, but one thing is for certain – the country saw how well the Bulldogs were represented in Omaha. Fans came out in the tens of thousands in support of their team. Big names like Dak Prescott and Jeffery Simmons were there to cheer on the Maroon and White. You also saw former Bulldog greats Rafael Palmeiro and Jonathan Papelbon in the stands, watching their former school try to achieve something that they were not able to accomplish. For an outsider watching the series, you saw how much MSU baseball is loved and had to come away impressed.

Getting to this moment was not an easy one for the Bulldogs. They had to win more games than any other team to get there and they did it on shorter rest. Vanderbilt came out of the losers bracket where they were gifted a spot in the finals when NC State was unable to participate due to covid protocols. This gave Vanderbilt an advantage as they didn’t have to play as many games and they were able to have more rest than the Bulldogs. Vandy was already picked as the favorite by many to win the championship even before the CWS started and this new advantage certainly made it seem as if the odds were stacked against MSU.

After getting beat 8-2 in the first game and down 0-1 in the series, the Bulldogs were on the ropes. But, if you’ve been following this team at all this year, you’d know that the Bulldogs are never out. In fact, sometimes they play their best ball when their backs are against the wall. And that’s exactly what they did.

The Bulldogs got punched in that first game, but responded with a a punch of their own, thumping Vanderbilt 13-2 in game two. With the series tied at one apiece, the Bulldogs would have a chance to play for their first ever national title. The challenge now would be that Vanderbilt would be able to throw their Ace and potential 1st overall pick in the upcoming MLB draft – Kumar Rocker against the Bulldogs. MSU had already faced Rocker once this season where he threw a three-hit complete game against them. However, that game was in Nashville. This time around, he would not only have to face the Bulldog lineup again, but the estimated 20,000 MSU fans in the stadium and the millions rooting for the Bulldogs around the country. The pressure was on him.

The first pitch of the game was driven into right field by Rowdy Jordan. That set the tone for the rest of the game and the Bulldogs never looked back. State knocked Rocker out early in the 5th inning and shut the door on the Commodores when they brought in Landon Sims to close the game in the 7th. The long wait was finally over. The Bulldogs got to dogpile in Omaha and the celebrations have not stopped since that the final out in the 9th. After 12 tries in 50 years, the Mississippi State Bulldogs are National Champions.