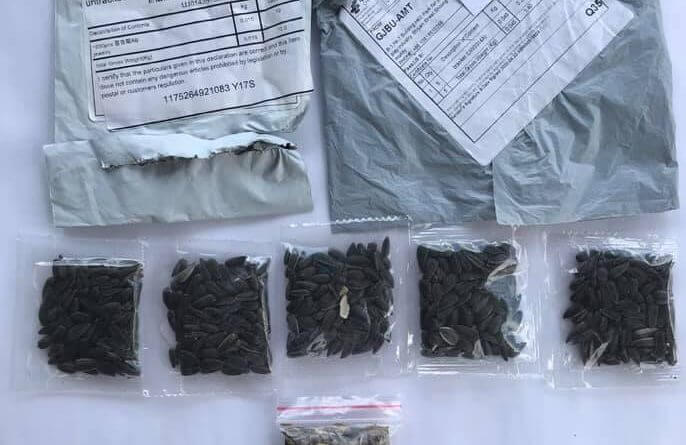 There have been reports in numerous states of residents receiving unsolicited, mysterious packages of seeds in the mail from China.

Officials are urging any who receive these not to plant them. In at least four states, officials are asking residents to report any seed packages received from China, warning that they could be invasive or otherwise harmful. Based on photos, the seeds appear to be in white pouches displaying Chinese lettering and the words “China Post”. Some packages were even labeled “jewelry”, according to the Kansas Department of Agriculture.

Reports of packages of seeds have also come from Utah, Arizona, and Ohio, according to local news reports. These seeds could be dangerous. The Washington State Department of Agriculture made a statement saying, “Unsolicited seeds could be invasive, introduce diseases to local plants or be harmful to livestock.”

Police in Ohio stated that the packages appeared to be a part of a “brushing” fraud, which is an exploit by a vendor to bolster product ratings and increase online visibility. They do this by shipping inexpensive product to an unknowing receiver and then submitting positive reviews using the receiver’s name under the guise of a verified owner. The seeds do not appear to be “directly dangerous”, the Ohio police department said, but they would still prefer for people to err on the side of caution and contact their local police departments to properly dispose of the seeds.

The Mississippi Commissioner of Agriculture released a statement saying “If you receive unidentified seeds from China, DO NOT PLANT THEM. And don’t throw them in the trash. Please contact our Bureau of Plant Industry Office and report the seeds at 662-325-3390.”

“Mysterious seeds from China! Things are getting stranger all the time in 2020. Several states in the southeast have reported the arrival of unwanted seeds and other goods from a China source. Our office has received contact from a few Mississippians reporting the arrival of unidentified seeds. If you receive seeds from China, DO NOT PLANT THEM. And don’t throw them in the trash. Please contact our Bureau of Plant Industry Office and report the seeds at 662-325-3390. We are developing a protocol for the best way to deal with them.”