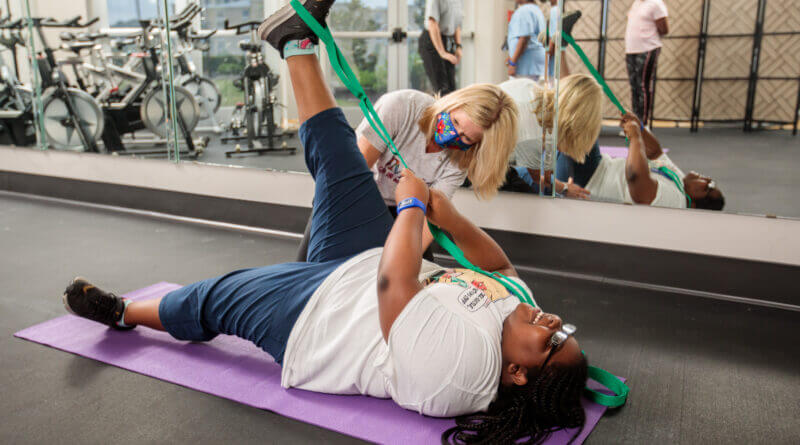 A healthy mix of diet and exercise still goes a long way toward curbing obesity in adolescents, UMMC experts contend, despite a renewed focus on weight-loss drugs by pediatric medicine’s major support group in the U.S.

Earlier this month, the American Academy of Pediatrics (AAP) issued updated guidelines on evaluating and treating childhood obesity, the first such revision since 2007. Obesity affects 14.4 million children and adolescents in the U.S. and is a “complex and often persistent chronic disease,” the report’s authors wrote. The prevalence rate rises with each age between 2 and 19, but overall is 20 percent, or one in five. Mississippi still ranks second in the nation for the prevalence of obesity from ages 10 to 17.

New guidelines in the face of such an acute public health issue after so long is a godsend by itself, said Shanda Sandridge, a nurse practitioner in pediatric gastroenterology at Children’s of Mississippi.

“We have been waiting for AAP guidelines to be released and are excited to finally have some updated clinical guidelines for the treatment of pediatric obesity,” Sandridge said, adding the new path forward for primary care providers offers more “urgent and aggressive treatment” versus a “watch and wait” strategy from earlier recommendations.

“Intensive lifestyle change that includes both the family and the child is still the most effective treatment for pediatric obesity,” she said. “This treatment includes counseling and education that focuses on healthy eating, exercise, sleep and stress management.”

A team of 21 pediatricians and other health care professionals stressed lifestyle and behavior changes as the best ways to combat obesity in children, but also for the first time emphasized medications and surgery in guidelines for certain children.

Those meds include six approved by the FDA for long-term use in children ages 12 and older and others approved specifically for children 6 and older with conditions confirmed by genetic testing. None of the drugs, all of which are available in myriad brand names, could be recommended for younger children aged 2 to 12 due to lack of evidence, the authors noted.

AAP’s acknowledgement of approved medication to deal with obesity in children and adolescents is a welcome change and gives pediatric experts another tool to use in treatment, said Dr. Naznin Dixit, professor and chief of pediatric endocrinology and diabetes at Children’s of Mississippi.

“The first clinical practice guidelines on obesity in children was long overdue,” Dixit said. “It provides an evidence-based road map to primary care providers for managing obesity in children in their practice. And it outlines strategies for both the patient and their family engaged in the conversation to prevent diseases related to obesity, such as diabetes and heart disease.”

Weight loss drugs and surgery for teens works best for only more severe cases, in addition to behavior and lifestyle changes, and after discussing the risks involved with their health care provider, Sandridge said.

“Managing our weight can be very challenging and we are all looking for that quick fix such as medication or surgery,” she said. “But, the bottom line is that neither of these options have shown long-term effectiveness without the additional behavioral/lifestyle change component.”

Surgical options the AAP says are safe and effective for those 13 and older, pending a referral to a comprehensive pediatric metabolic and bariatric surgery center, include laparoscopic gastric bypass and vertical sleeve gastrectomy.

Authors specified multiple diet tips for pediatricians to stress to adolescents, including limiting consumption of sugary sodas and rounding out meal plates with foods heavy in nutrients but balanced between proteins and carbohydrates.

The new guidelines also say body mass index, or BMI, remains the best clinical tool to measure and mitigate against obesity in adolescents. A child is considered obese when the BMI is above the 95th percentile for children of the same age and gender and severely obese when it hits 20 percent higher than the 95th percentile.

A separate study released in 2021 by the CDC found BMI in nearly half a million U.S. children between 2 and 19 years old had increased nearly twofold during the first eight months of the COVID-19 pandemic. The time period coincides with the switch to virtual learning in school districts nationwide for roughly a year before the first vaccines became available.

By and large, school-age children in Mississippi have now returned to the classroom for regular instruction, but annoyingly low ratings for children’s health persist.

The UMMC Center for Integrative Health touts the successes of its pediatric weight management group in steering children to a healthy life through education and exercise, for which the new guidelines say should be done for an hour per day for children and adolescents. Also noted is a recommended limit on “screen time” to an hour a day for 2- to 5-year-olds, followed by at least a reasonable parent-monitored plan for older children.

The Empower program – formerly known as Iron Kids – was rebranded effective this week and pared down to six weeks from eight, but still stresses to those 8 to 18 to put down those cellphones and other handheld media in favor of physical exercise. Its participants are referred by specialists in Children’s of Mississippi weight management program.

“We help kids gain a better understanding of what it is to take care of their mental and physical health,” said Rachel Dear, physical therapist and assistant director of CIH. “We cover both mental and physical health by incorporating dynamic stretches and goal-setting with our nutrition. And we feature feats-of-strength events along with things like playing Jeopardy, depending on whether we have a calmer group or a more active group.”

The program received $11,000 in 2022 from the Children’s Miracle Network to sponsor a relaunch, Dear said. Times and dates for this semester’s sessions are tentative, as a physical therapist resident is expected to join the program and assist her in running it seasonally, she said.

Patients are evaluated ahead of time, including those taking medications, most often for diabetes, she said. “Some of my older ones have been on diabetes meds, but overall it’s just been a handful of cases.

“It’s just a holistic approach – that’s what our clinic is all about anyway.”

Mental health experts also like a “team approach,” where success is more common when families show they have a collective stake in a child’s health.

“The literature is very clear that weight management interventions for children and adolescents should be family-based treatments,” said Dr. Hannah Ford, director of the UMMC Psychology Residency Program. “Aspects such as education, positive reinforcement for healthy behaviors and removing less-healthy food from one’s diet are difficult, if not impossible, to put in place without the whole family involved.”