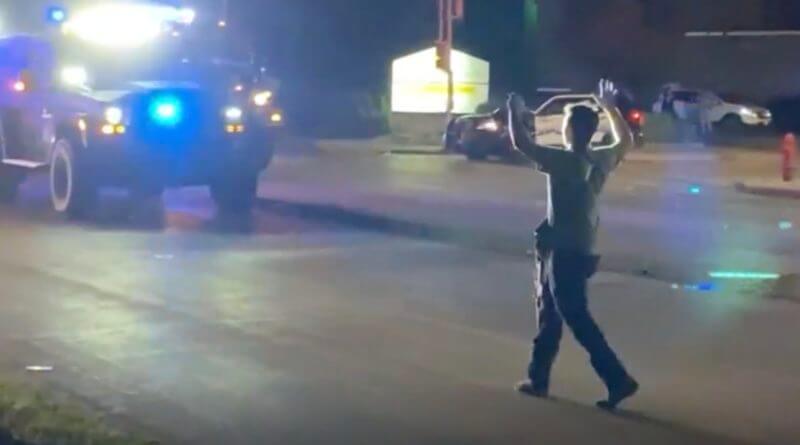 CONTENT WARNING: Please be aware that the videos in this article contain
graphic content that is disturbing and may be difficult to watch.

KENOSHA, Wisconsin – A 17-year-old Illinois man was taken into custody Wednesday in connection with two fatal shootings that took place overnight during the protests in Kenosha, Wisconsin.

Kenosha Police Chief Daniel Miskinis confirmed that Kyle Rittenhouse has been charged with first-degree intentional homicide in connection with the deaths. He said Rittenhouse “was involved in the use of firearms to resolve whatever conflict was in place.”

Livestream footage of the shootings and surrounding events is circulating social media today. Several videos showed a person believed to be Rittenhouse opening fire during the protest. The firearm is a long gun that appears to be a semi-automatic rifle, such as the AR-15 style rifle Rittenhouse later used in the murders.

In one video, he is seen running through a crowd of people in a street as someone yells, “That guy shot someone.” He almost immediately falls and as people approach, he is seen opening fire. Another video shows what appears to be Rittenhouse running away from an injured protester while on a cellphone. As the man passes out of frame, a male voice can be heard uttering “I shot somebody”.

Police have not confirmed that the person in these videos is the perpetrator.

Additional footage shows the same individual moving freely behind law enforcement lines earlier in the evening. In that video, the teenage male can be seen walking alongside another armed man while other apparent white militia members line the street where several police vehicles move. They shout support to the officers, who stop their vehicles and speak to the crowd.

“Hey, thank you guys, man”, says one officer, his voice distorted by the loudspeaker through which he speaks. “Do you need water?”

The man presumed to be Rittenhouse is among several militia members who raise their hands to request water from the officers.

“We’ll throw you one”, the officer says.

The man then weaves into the street and darts between several law enforcement vehicles with lights flashing, seeming to hail one large vehicle as the officers continue to talk to the crowd and begin handing out water to militia members. The camera loses sight of the man for a moment as the cameraman turns to show an officer appearing from the roof hatch to toss water bottles to the waiting crowd.

“We appreciate you guys. We really do”, the loudspeaker blares.

In the background of the video, another side of the evening’s events plays out. Other officers can be heard using their own loudspeakers nearby. They order protesters to disperse, announcing that this will be the “final warning” while their compatriots share provisions with civilians, including the man presumed to be Rittenhouse, in the foreground.

There is also video footage of law enforcement’s response to the second shooting, which has garnered significant outrage from online commentators today. That video shows a group of police vehicles advance on the crowd. The man presumed to be Rittenhouse approaches them, then alternates between raising his hands in surrender and gripping his gun. Law enforcement vehicles then slowly pull away without engagement as the man waves goodbye.

Two people were killed and a third was seriously wounded in the shooting. The incident took place during a protest over the police killing of Jacob Blake, a 29-year-old Black man who was shot multiple times in the back as he tried to enter an SUV with his children inside. The victims have thus far been identified only by their ages and hometowns: a 26-year-old from Silver Lake, Wisconsin, and a 36-year-old from Kenosha.

Rittenhouse is a resident of Antioch, Illinois, located approximately 20 miles across the state line from Kenosha. As a minor, he is not legally allowed to own, carry, or cross state lines with a firearm.

His social media posts show that Rittenhouse loves guns, idolizes police and harbors nationalist sentiments. In one Facebook photo, he posed with his rifle and American-flag slippers. Several other photos feature Blue Lives Matter flags and insignia, and one shows a younger Rittenhouse decked out in a “safety cadet” uniform.

The perpetrator is currently being held by the Lake County Judicial System in Illinois while awaiting an extradition hearing.