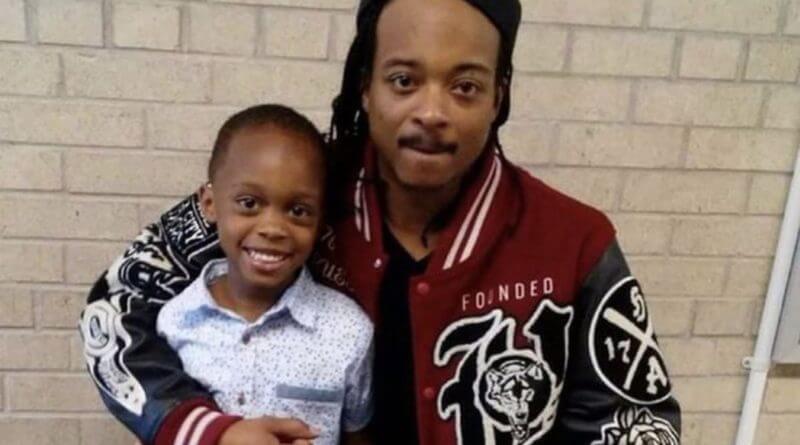 CONTENT WARNING: Please be aware that the video in this article contains
graphic content that is disturbing and may be difficult to watch.

The victim has been identified as Jacob Blake, 29. Ben Crump, the Blake family’s attorney, reported that Blake had stopped and was “attempting to break up a fight between two women.” When police arrived at the scene, Blake reportedly disengaged with the women and returned to his vehicle to check on his children.

The video showed the unarmed Blake, who is a Black man, approach his gray SUV, open the door, and lean inside. An officer then grabs his tank top and shoots him in the back from point-blank range as bystanders scream in the background. Blake then collapses into the car and onto the horn, which blares an ominous, sustained note as the video continues.

It is unclear from the video how many officers fired on Blake, but seven shots can be heard and his family reported that all seven shots hit the young father before police ceased fire. Crump also said Blake’s three sons, ages 3, 5 and 8, were inside the vehicle at the time of the shooting.

The Kenosha Police Department said in a statement shortly following the incident that Jacob Blake was in serious condition at Froedtert Hospital in Milwaukee, Wisconsin. Blake’s family has since confirmed that he is out of surgery and stable, but has remained in intensive care, with the most recent reports revealing that Blake is paralyzed from the waist down.

The shooting took place on Sunday, August 23rd – just three months after the killing of George Floyd in Minneapolis police custody and amid national unrest around systemic racism and police brutality. Blake’s shooting has reignited the community’s outrage and sent them back into the fight.

Protesters poured onto the streets Sunday after the video emerged on social media. Demonstrators burned vehicles and buildings alike, including the probation office, the department of corrections, a credit office, and a car dealership that reportedly sustained $1.5m in damage. Two city trucks were among the vehicles torched as protestors faced off against police for the third day in a row.

Law enforcement deployed tear gas and rubber bullets as demonstrators chanted, “No justice, no peace,” in front of the Kenosha County Courthouse. Eleven arrests have been made.

Since Monday, the National Guard have been present to “protect critical infrastructure, such as utilities and fire stations and to ensure Kenoshians are able to assemble safely”, said Wisconsin Governor, Tony Evers. He declared a state of emergency curfew from 8 p.m. Tuesday to 7 a.m. Wednesday. Sheriff David Beth asked “the public to stay off the streets for their safety.”

Although Evers condemned the shooting in a statement this week, noting that Blake is “not the first Black man […] to have been shot or injured or mercilessly killed at the hands of individuals in law enforcement in our state or our country”, his actions echo those of other officials whose cities have been the center of similar unrest.

These tactics, however, have won them few allies. The use of tear gas (and many similar compounds) was banned by the Geneva Protocol of 1928 – meaning that police are using a chemical against American citizens that soldiers worldwide are prohibited from using in war. Many political and online commentators feel that state-funded violence against American communities only serves to deepen animosity and escalate violence, and promotes the idea that the goal is to silence their detractors.

“We’re telling you we are dying and you send soldiers to shut us up!”, one protestor screamed in a livestream of Monday night’s demonstration in Kenosha. “Why are they here? Why are they here?”

The Blake family attorney insists that reform is the only true way to mitigate the situation.

“If we don’t have the systematic reform that this moment in America is crying out for”, Crump said, “then we are going to continue to see hashtag after hashtag, protest after protest, and cities burning all across America.”

Two Kenosha officers are on administrative leave, as is customary after a police shooting. The local police union has urged the public to withhold judgment until a state investigation, now underway, is complete.