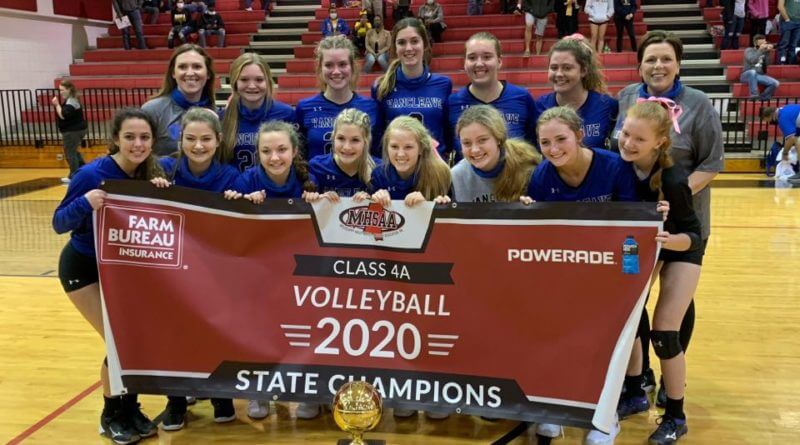 It was the second straight state championship won under Vancleave coach Christina Daigle as the Lady Bulldogs finished with a season mark of 28-6.
Pontotoc, under ninth-year coach Annie McGregor, ended their run to the final match with a record of 18-5.

Vancleave took control of the match from the start, leading all of the way. A 10-3 Vancleave lead forced a Pontotoc timeout, but the Lady Bulldogs continued to press as Vancleave built the margin to 15-5. The advantage grew to 22-8 when Pontotoc called their second timeout of the set, but a kill from senior Eve Mixon made the score 23-8 on their way to the 25-12 set one victory.

“The name of the game for us is first five, first to 10, first to 15,” Daigle said. “We play a lot of small games to five so that’s what we were focusing on, getting to those milestones first.”

Pontotoc started off the stronger of the teams in the second set with a 4-1 lead, but a Vancleave rally, which included a Hannah Burks service ace to give the Lady Bulldogs their first lead of the set at 5-4, got them going on a run that would lead to a 12-4 advantage before Pontotoc could get back on the scoreboard. Another Mixon ace gave Vancleave a 19-7 lead in the set and it continued in their favor to the 25-11 set two victory.

In the third set, the first six points were traded back and forth until a Pontotoc serve into the net gave Vancleave a 5-3 advantage in the set. Another short run of points improved the margin to 7-3 before Pontotoc staged another rally to get to 6-7.

However, the Lady Bulldogs rallied themselves and after a Pontotoc shot went wide, Vancleave was rolling with a 13-8 lead.

“The girls had a ton of incredible energy and I think that played to our advantage overall,” Daigle said.”

That margin improved to 17-11 when McGregor called a timeout to rally back her troops, but it was not enough, as Vancleave held the margin to the 25-16 set and match point win.

“We knew that their (Pontotoc) offense was going to be slow compared to what we run,” said Daigle. “We run a pretty quick offense. But they did have some big girls on the front row, so we were fully prepared to get blocked a lot.”

“Early on, we established the good fundamentals,” Daigle said about the strong program that is developing at Vancleave. “With this group it started in the seventh grade. We have a very high standard, we hold them accountable for that high standard and these girls live up to it.”