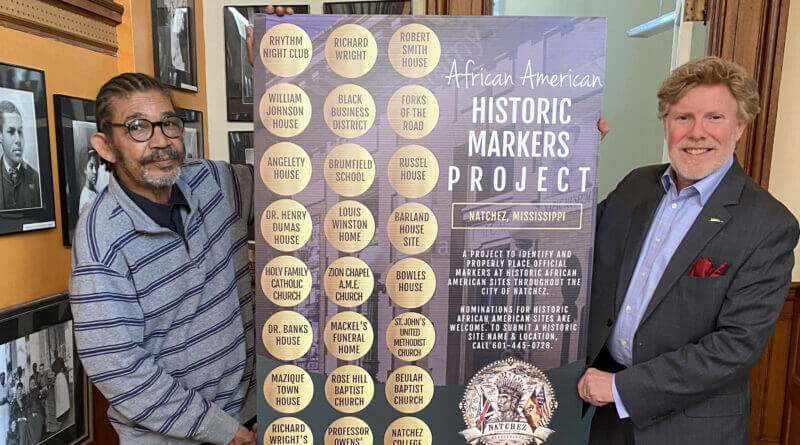 Photo: Bobby Dennis, executive director of the Natchez Museum of African History and Culture, left, and Mayor Dan M. Gibson, display the banner with the list of sites recognized in the African American Historic Markers Project. The list has been updated since the time this banner was created. (Courtesy photo)

The City of Natchez and the Natchez Museum of African American History and Culture are being recognized for their contribution of 27 historical markers for African American sites in Natchez.

The Awards Committee of the Mississippi Historical Society recently announced the city and the museum were selected for the prestigious 2023 Award of Merit for recognizing the African American sites. The award is “presented annually to individuals or organizations for their outstanding archival, museum, or media interpretation work,” according to MHS.

Mayor Dan M. Gibson voiced his gratitude for the honor. “We are so grateful for this recognition,” he said. “Properly designating these 27 historic sites that are so important to the history of Natchez is long overdue. What a blessing it is to be a part of the progress taking place in our community.”

Gibson said that he and the city of Natchez are “so very grateful” to Museum Executive Director Bobby Dennis, Visit Natchez, and the Historic Natchez Foundation. He said their leadership and support were vital to making the project a reality.

Brother Rogers, director of Programs and Communication Division for the Mississippi Department of Archives and History, noted the recognition had the full support of MHS, which included Marcus Ward, chairman of the Awards Committee, and Daphne Chamberlain, the Society’s president.

“The Society applauds this outstanding project to celebrate the contributions of African Americans to the history of Natchez,” he said in an email to the mayor. “Thank you for your work in Natchez, our state’s most historic city, to promote an inclusive, accurate history of our state. We look forward to recognizing your work at the annual meeting of the Mississippi Historical Society.”

Recipients of the Awards of Merit will be formally announced at the annual meeting of the Mississippi Historical Society that will take place on March 2-3, 2023, at the Two Mississippi Museums in Jackson. The awards will be presented at the Awards Luncheon on Friday, March 3, at 12:30 p.m.

Gibson and Dennis have been asked to attend the luncheon. Dennis said he was happy to learn about the award. At the same time, he noted, he was also excited about the historical markers.

“It gives me great pleasure to present the markers for these 27 African American sites,” Dennis said. “The sites capture the contributions, as well as the sacrifices of our fore-parents in the struggle and the success of the African American in the development and growth of the city of Natchez.”

Dennis said he is also proud of the role the museum has played in telling the complete history of Natchez. The museum is commonly called “NAPAC museum.” NAPAC stands for Natchez Association for the Preservation of African American Culture, the agency that operates the African American museum.

The markers for the 27 sites will be unveiled in a ceremony called, “Celebration of Historical African American Sites.” The event is scheduled for 1:30 p.m., Wednesday, Feb. 1, 2023, at the Museum at 301 Main Street. It is free and open to the public.

The contribution of the markers is part of the African American Historic Markers Project. The unveiling ceremony will serve as a kickoff for Black History Month 2023, according to the program organizers.