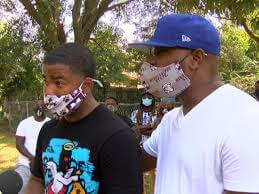 A freshman for the Mississippi State Bulldogs was shot on Sunday night as he was preparing to head to Starkville.

18-year old Warren Fleming, formerly of Hartfield Academy, was shot by a hunting rifle in Jackson by unidentified individuals.

The shot impaled Fleming’s back through his back window. Luckily, his high school Jersey was draped over the back of his seat, which helped divert the bullet away from his spine.

“I just laid there screaming for help. I told my auntie to run back in the house so she didn’t get shot,” Fleming said. “I told her I’d rather just sit outside and die rather than her come out here and have to worry about this. She can tell you it sounded like a war zone here in front of her house.”

Doctors told Fleming and his family the bullet was a mere two inches away from hitting his spine, which would’ve ended his football career and most likely his life.

After the incident, Fleming has sworn off returning to Jackson, and the family is looking to move Fleming’s aunt out of the capitol city.

“I refuse to come back to Jackson once I get to Starkville. My plan is to get a house away from here and not come back here.”

“People out here dying because of rap beef, and being in the wrong neighborhood, because you’re in this hood, you’re going to die… It’s ridiculous.”

Doctors have informed Fleming that he will make a full recovery and will return to football.