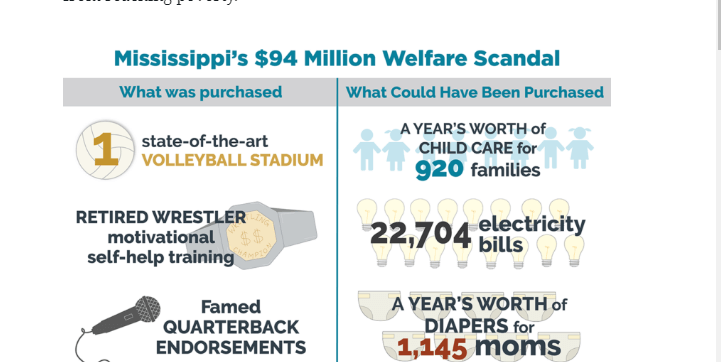 Mississippi welfare: What we bought versus what we could have bought

The Mississippi state auditor has officially questioned $94 million in welfare spending connected to what the office has called the largest public embezzlement scheme in state history.

Here’s what was bought versus what we could have been bought with funding from the federal Temporary Assistance for Needy Families program, which is intended to assist families in poverty or prevent families from reaching poverty.

Here’s a breakdown of the calculations in each item:

Nonprofit Mississippi Community Education Center paid the Southern Mississippi Athletic Foundation $5 million through a lease so the foundation could build the new state-of-the-art volleyball stadium on campus, Mississippi Today first reported. The nonprofit said it would use facilities to conduct programming for the area’s underserved population but since has used the university facilities for one event.

The average annual cost of child care in Mississippi is $5,436, according to Economic Policy Institute. Five million dollars could have paid for a year’s worth of child care for 920 low-income families so they could go to work.

That amount could have paid the average electricity bill of $138.63, according to U.S. Energy Information Administration, 22,704 times.

With the $1.1 million in welfare funds the nonprofits paid Brett Favre for speaking engagements he never attended, according to the audit, Mississippi could have purchased roughly 3 million diapers, about a year’s worth for 1,145 moms. The average cost of diapers is $80 a month, according to the National Diaper Bank Network.

Diapers are essential to the health of babies, but nationally, 57 percent of parents with diaper needs who rely on child care, most of which require parents to provide diapers, said they missed an average of four days of school or work  in the past month because they didn’t have diapers, the Network reported.

Mississippi Community Education Center bought three vehicles — a 2018 Armada, Silverado Chevrolet Truck and Ford F250 — for its founder Nancy New and her sons Zach and Jess totaling $166,318, according to the audit.

TANF pays transportation stipends of between $200 and $300 for low-wage workers to get to work. With the amount the News spent on their vehicles, the state could have funded 655 stipends — a full year’s worth for 55 workers.

Mississippi Community Education Center paid $371,000 towards the loan on Marcus Dupree’s Flora ranch, owned by his foundation but which appears to be a personal residence, the auditor said and Mississippi Today first reported, not including the $198,846 it paid Dupree in salary.

For the amount it paid on his mortgage, the state could have covered one rent payment on the average 2-bedroom apartment ($750, according to the National Low Income Housing Coalition) to prevent eviction for 494 families.

Mississippi Community Education Center paid Paul Lacoste’s company Victory Sports Foundation $1,309,183, which included a $70,000 vehicle, to operate a boot-camp style fitness program that Lacoste also charged some participants a fee to attend, according to the audit.

Mississippi spent just 5 percent of TANF in 2018 on basic cash assistance to needy families, about $170 a month for a family of three, which they can use towards the essential items — toiletries, school supplies, cleaning products, rent, utility bills —  that can’t be purchased with Supplemental Nutrition Assistance Program benefits, formerly known as food stamps.

The cash assistance reaches about 3,500 families, roughly 6 percent of families living in poverty in Mississippi.

If Mississippi had spent $94 million on cash assistance, it could have reached roughly 46,078 families, or 42 percent of families living in poverty.

Read all of our welfare in Mississippi coverage here.