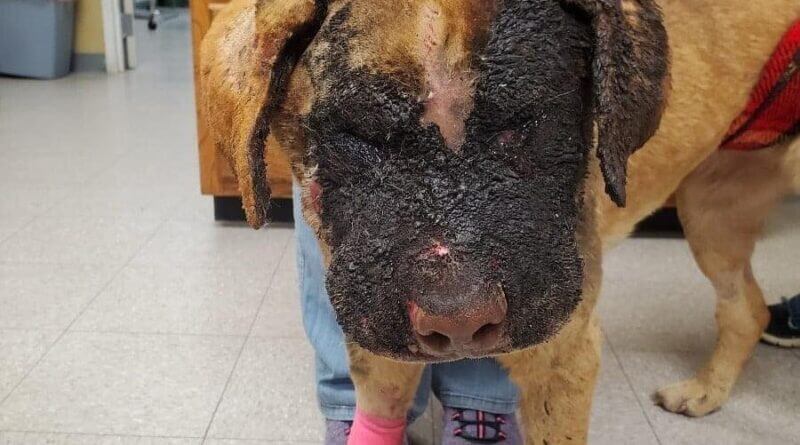 No charges will be filed against a child who has admitted to setting a dog on fire, according to a release from the Tate County Sheriffs Office.

On April 23rd, the Tunica Humane Society posted the following:

Yesterday, Buddy was happy and carefree, like most dogs that live in the country. He loved everyone he met in his neck of the woods. His tail wagged constantly. I have been told by several people he was the sweetest dog, never a threat to anyone.

And then the unthinkable happened.

Someone or several sick individuals, set Buddy on fire. He returned to his home with an extension cord wrapped around his neck. And his face was burnt and charred.

The Tate County Sheriff’s Department has an active investigation ongoing on this case. They are trying to determine exactly what happened to cause the horrible injuries to this sweet dog. It is my prayer that they do not stop until they get some answers and there is Justice for all Buddy has been forced to endure.

The Tunica Humane Society was asked to take responsibility for Buddy’s medical care moving forward. Detective Sanders knows beyond any doubt, we will do everything possible to save this dog. He didn’t deserve this cruel act of violence. No animal deserves to be tortured.Sadly, Buddy’s prognosis isn’t good right now.

If this dog can recover, he will have a long, long road ahead. His face is so swollen from the burns, his eyes are not visible at the moment. Dr. Lisa says he will likely have to undergo surgery, if his eyes can be saved at all. He is likely to have damage to his nasal cavity that could require another surgery. All of the burnt flesh on his face will be peeling off in the days to come. And his body can become consumed with infection from all of the trauma. Hopefully, Buddy can bounce back from all of this but not without all of our prayers.

As many of you are aware, last Thursday we received a report of a dog that was severely burned on Peavine Road. This morning our investigators obtained a confession from a juvenile who admitted to purposely injuring the dog.

Due to the age of the juvenile we are not able to file criminal charges in this case. While this terrible act is a felony crime punishable by up to 3 years in prison, under Mississippi law no person under the age of 12 can be charged with a crime.