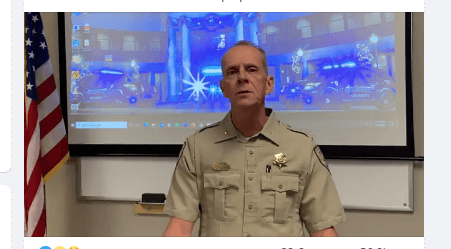 The Mooreville high school soccer coach arrested on multiple felony counts related to sexual contact with a student according to a release from the Lee County Sheriffs Department.

Lee County Sheriff Jim Johnson said Luke Tanner Mason was arrested following a probable cause hearing Friday and charged with three counts of the enticement of a minor for sexual purposes and one count of the dissemination of sexual material to a person under 18.

“A few weeks ago, the Lee County Sheriff’s Department was made aware of allegations of inappropriate communications and contact from a teacher to a student,” Johnson said. “We were contacted by the school system and immediately opened an investigation into the accusations made.”

Mason was arrested following a probable cause hearing. He is currently in custody.

See the complete press conference related to the allegations below.

A few weeks ago, the Lee County Sheriff’s Office was made aware of allegations of inappropriate communication and contact from a teacher to students. Under Mississippi Code 97-5-51, health care providers, clergy members, school staff, etc. are all considered “mandatory reporters” and therefore required by law to report any allegations of sexual or physical abuse of children that are brought to their attention.

We had been contacted by the school system, who share our priority of keeping the children in our community safe, and we immediately opened an investigation into the accusations being made.During our investigation, it was alleged that Mooreville High School Soccer Coach, Luke Tanner Mason, made several attempts to engage in inappropriate acts with children under the age of eighteen years old, which he holds a position of authority due to his employment.After numerous interviews and gathering of evidence, there was sufficient evidence discovered for the Lee County Sheriff Office to sign affidavits against Mr. Mason and to have a probable cause hearing on the allegations.

On 03-19-2021, a probable cause hearing was held and Circuit Judge Chip Mills issued warrants for Mr. Mason’s arrest on three counts of enticement of a minor for sexual purposes and one count of dissemination of sexual material to a person under the age of eighteen.Mr. Mason was taken into custody and booked into the Lee County Sheriff’s Department on all charges. Circuit Court issued a bond amount of $85,000.00.