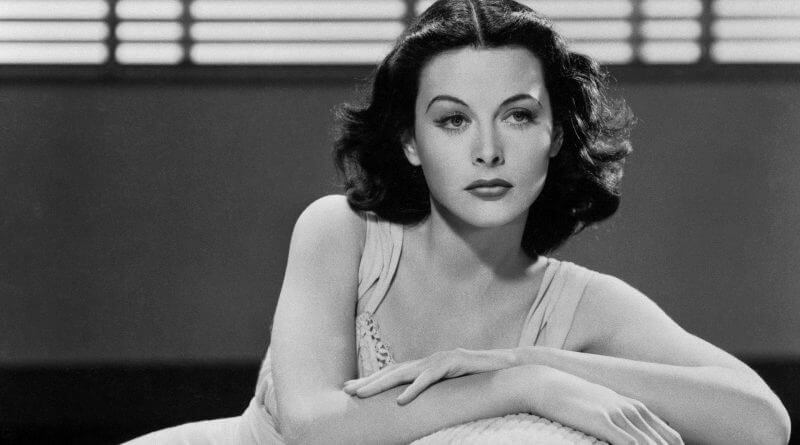 “Any girl can be glamorous. All you have to do is stand still and look stupid.”

Hedy Lamarr always had a complex relationship with beauty. Just before her meteoric rise to fame in the 1930s, MGM branded her “the most beautiful woman in the world”. Onscreen, she was pure heat. In ‘Ecstacy‘, she became the first woman ever to portray an orgasm on film. She was the smoldering bombshell who ignited audiences with her performance in the Cecille B. DeMille classic, ‘Samson and Delilah‘. Her raven locks and alabaster complexion were the inspiration for Snow White, and later, for Catwoman. Offscreen, the utter tabloid fodder that was her romantic life dominated Hollywood news cycles throughout her career. The world was obsessed with Hedy Lamarr – but the world only knew part of her story.

Born in Austria as Hedwig Eva Maria Kiesler, the woman who would become Hedy Lamarr had a mind that was far more captivating than her beauty. Even as she achieved international fame as a Hollywood movie star, Lamarr retreated to her trailer between takes in order to work on her true passion: inventing.

Her curiosity was evident even in childhood. At age five, Lamarr disassembled a music box to see how it worked, then perfectly reassembled the parts. This led to a lifelong love of science and experimentation. She improved the design of traffic lights and once developed a tablet that could be dissolved in water to create a carbonated soda – although by her own admission, the drink tasted awful and she shelved the idea.

Few people in Hollywood knew of Lamarr’s interest in science, and even fewer understood her natural aptitude for it. What use did film studios have for a smart woman in the Golden Era, after all? Thus began a lifelong struggle with her appearance, a love-and-hate battle within herself. Lamarr was a confident woman, comfortable speaking plainly about her incredible beauty and the power it gave her over men and in the film industry, but she was equally disdainful of that fact.

“The brains of people are more interesting than the looks, I think,” she said in 1990.

In the 1997 book, ‘Hedy’s Folly: The Life and Breakthrough Inventions of Hedy Lamarr, the Most Beautiful Woman in the World’, inventor Carmelo “Nino” Amarena recalled conversations with the brilliant starlet. “We talked like two engineers on a hot project,” Amarena said. “I never felt I was talking to a movie star, but to a fellow inventor.”

A handful of people knew Hedy Lamarr for what she was: an ingenious thinker. Among those was aviator and business magnate, Howard Hughes. The two dated for some time and although the romance was a hot topic in the press, their deepest bond was that of fellow inventors. In fact, Lamarr actually revised some of Hughes’ aircraft designs, noting that the boxy frames were contrary to the wind-resistant shape of the fastest birds and fish. This would make his planes “too slow” in her estimation, and she suggested sculpting the hulls into the aerodynamic shapes that we are familiar with today. The billionaire tycoon had such faith in her designs that he put an entire scientific team at her disposal, ordering them to do and make whatever she wanted.

As an inventor, Lamarr often worked with a partner, and she tended to prefer eccentric (some might say genius) men. Her most prominent scientific partner was an American avant garde composer named George Antheil, with whom she shared a close intellectual kinship. This pairing would spawn the most significant discovery of their scientific careers.

Lamarr was staunchly anti-Nazi during World War II, as she fled Austria to America prior to the War. She offered her scientific expertise to the National Inventors Council early in the conflict, but was told that she would make a bigger difference using her status to sell war bonds. Lamarr acquiesced and sold $25m worth in ten days before she realized a fatal flaw in the Allies use of radio-controlled torpedoes. A single torpedo could severely damage or sink enemy ships, but enemies could easily send the torpedo off course by broadcasting interference at the same frequency, known as “signal jamming”. To prevent the Axis from jamming Allied torpedoes, Lamarr and Antheil developed the world’s first frequency-hopping spread spectrum.

On 11 August 1942, U.S. Patent 2,292,387 was granted to Antheil and Lamarr, using her married name of “Hedy Kiesler Markey”. Unfortunately, the United Stated Navy refused to accept designs from civilians at the time and the technology was not implemented for another twenty years, when it was used by U.S. military ships during a blockade of Cuba. By then, the patent had expired and was not discovered again until 1997, when the Electronic Frontier Foundation gave Lamarr a belated award for her contributions.

That was all it took. Lamarr and Antheil’s patent was over fifty years old and it was still light-years ahead of the layman understanding of science – but the tech-world understood the potential of this pioneering design. The following year, Wi-LAN Inc. acquired a 49% claim to the patent from Lamarr (Antheil was already deceased, having passed in 1959) for an undisclosed amount of stock and the company began the development of new wireless technology in earnest. Out of Lamarr and Antheil’s frequency-hopping design grew modern spread-spectrum communication technology as we know it today, which is at the root of nearly all the technology we use on a daily basis. First, it helped power cordless telephones, then our beloved cellphones, and eventually the Bluetooth and WiFi that essentially powers the world.

Thus, a emigrant movie star, known only for her beauty and sensuality, laid the groundwork for technology as we know it. It just took a few forward-thinking nerds (and several decades) to show the world that her rightful place in history is not only on the Hollywood Walk of Fame, but in the hallowed halls of academia, as well – for Hedy Lamarr is the Mother of Wifi.

And Hollywood just thought she was pretty.