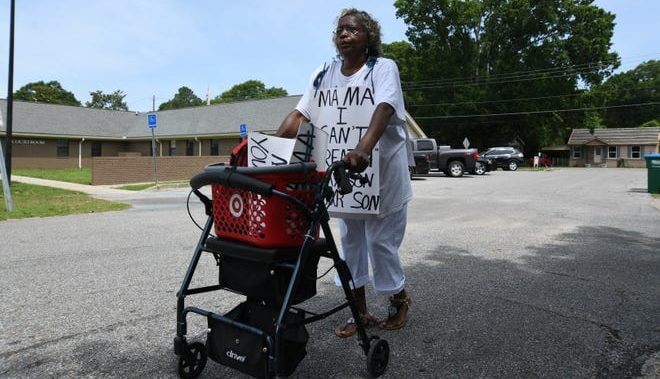 PETAL, Mississippi – Protester Lorraine Bates, 70, was arrested in front of City Hall Wednesday and charged with resisting arrest after refusing to use a damaged sidewalk.

Petal Police Chief, Matthew Hiatt, said police were called to an intersection where Bates was walking in the road, adding that it was not the first time she had been warned to stay on the sidewalk. Officers at the scene asked Bates to get out of the road several times as the elderly woman explained that she could not use the sidewalk. When officers did not allow her to continue on toward her destination, reported to be the Corner Market, Bates laid down on the road and refused to move.

Hiatt said officers picked her up and transported her to the police station to issue citations. Once at the station, Bates continued to lay on the floor until officers called an ambulance. According to Hiatt, Bates initially refused help before changing her mind.

“She told me they flung her around like a rag doll and hit her head on the car’s door jamb,” Bates’ attorney, Matt Lawrence, said in a statement on Facebook, asserting that officers did not pick up or carry his client to the squad car, but rather dragged her there.

Lawrence said he was not allowed to speak to Bates at the station, despite Bates’ request to speak with her attorney, and that he did not make contact with his client until she was being transported to the hospital. He reports that Bates was “bruised and banged up” with “a bad headache” after the arrest.

Bates was issued two citations, one for resisting arrest and another for obstructing traffic. Although she did not go to jail, she will be expected to appear in court to answer for the charges.

The sidewalk issue is not new in Petal. After receiving several warnings from police in the previous weeks, Lorraine Bates took her problem to the Board of Aldermen on July 7th. In the meeting, she explained that the sidewalk is so severely damaged that she, as an elderly woman using a rolling walker or wheelchair, cannot safely traverse the uneven terrain without tripping. She also reported previous injuries due to the poor condition of the sidewalk.

According to Lawrence, city leaders promised to survey the sidewalk and repair the most damaged areas immediately, but have thus far failed to do so.

Chief Hiatt insists the arrest was in the interest of Ms. Bates’ safety and the safety of others, although Bates maintains that there has never been any danger, as she moves to the side to allow cars to pass. Online commentators have pointed out that Bates is also highly visible, as she wears her protest signs instead of carries them, and is well known around Petal.

The story has attracted the attention of other activists, whose eyes were already on the small Mississippi town after Mayor Hal Marx’s comments following the death of George Floyd in Minneapolis. Marx referenced Floyd’s final words on social media, commenting “If you can talk, you can breathe.”

Of Lorraine Bates, the Mayor posted, “Our officers did everything they could to treat Ms. Bates with respect.”

Protesters gathered outside City Hall yesterday to protest her arrest.

“Today, Ms. Lorraine Bates was arrested for walking down the street in Petal, MS and charged with obstructing traffic and resisting arrest. She has no other way to travel and the sidewalks are not passable for her because she has to walk with a walker. She has brought up this issue to the city before and most recently two weeks ago in a long and detailed statement to the mayor, Hal Marx, and the board of aldermen. They acknowledged this danger and said that they would be repairing the sidewalk immediately, which they have not done. She was on her way to Corner Market in Petal when she was stopped by two cop cars. She was arrested and drug to the cop car, despite the fact that there were at least 4 officers who could have carried her to the car. She told me they flung her around like a rag doll and hit her head on the car’s door jam [sic]. Once she was at the police station, she was not allowed to speak with me, her attorney, despite the fact that she asked to do so. I was present at the station and had demanded to speak with her. The officer simply turned his back on me and walked away after saying he didn’t know if I was actually her attorney. They did not inform me that she was being sent to the emergency room. I did not have any knowledge of what was going on until the live video I shared earlier began. Only then did I even get to see her, and it was only because they had to take her outside to get her in the ambulance that that was even possible. I saw her earlier this afternoon in the hospital, and she is bruised and banged up with a bad headache. But she should be just fine in no time. Thanks everyone for your outpouring of support for her. She told me to tell you all that she loves and appreciates you! Believe me, there are many legal experts working on this who are going to do everything we can to ensure that justice is served.”