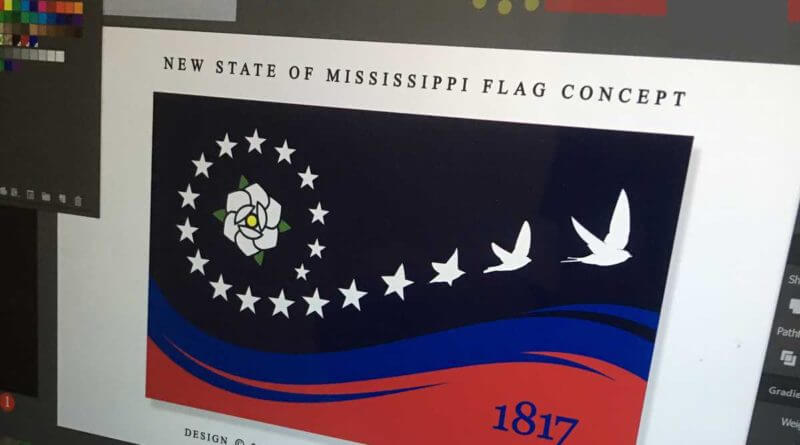 JACKSON, Mississippi – Governor Tate Reeves announced his appointees for the Mississippi Flag Commission today, naming a civic leader, a business leader, and a tribal leader to the commission that will redesign the controversial flag.

The Mississippi Flag Commission was established at the June 30th ceremony where House Bill 1796 was signed. The bill removed the existing state flag, which featured Confederate imagery, amid a growing national conversation about racism in America. Per the bill, Governor Reeves was required to choose his appointees from Mississippi Arts Commission, the Mississippi Department of Archives and History, and the Mississippi Economic Council. Reeves chose Frank Bordeaux from the Arts Commission; Betsey Hamilton from the Department of Archives and History; and Chief Cyrus Ben from the Economic Council.

Frank Bordeaux “currently serves as Vice President, Property and Casualty for BXS Insurance in Mississippi, which he originally joined in 2007 as an insurance producer. His primary focus is public sector business, Department of Defense contractors, and large hospitality risk. Bordeaux has been involved with numerous civic and nonprofit organizations over the years, including serving on the Gulfport Youth Sports Association, as a past Board Member of Feed My Sheep Soup Kitchen, and as a past Board Member of Lynn Meadows Discovery Center. Some of his professional affiliations include The Council of Insurance Agents & Brokers, Independent Insurance Agents & Brokers of America, and Independent Insurance Agents of Mississippi. A life-long Mississippian, Bordeaux and his wife, Jacqueline, have four sons, Miles, Hudson, Jack Fisher, and Frank.”

Betsey Hamilton “is a retired public school teacher, real estate broker and appraiser. With a strong passion for preserving Mississippi’s history while creating a brighter future for our state, Hamilton currently serves on the Board of Directors of the Union County Heritage Museum and as a member of the Commission on the Future of Northeast Mississippi. She has previously served as a founding member of the Board of Directors of the Union County Historical Society and the Tanglefoot Trail. Having been a Trustee for the New Albany Public School District and a member of the Advisory Council for the New Albany Boys and Girls Club, Hamilton is committed to ensuring the best education and futures for our children.”

Tribal Chief Cyrus Ben “is the fifth democratically elected Chief of the Mississippi Band of Choctaw Indians. Having been officially sworn into office on July 9, 2019, making history as the youngest chief, Chief Ben is guided in his leadership and service to the Choctaw people by five key initiatives: respect of others, fairness and equality to all, accountability in all areas, efficiency in practices in addition to the support and appreciation of all employees and Tribal members. Chief Ben feels strongly about educating and mentoring our youth and shows this by being actively involved within his community. A life-long resident of Neshoba County, Mississippi, Chief Ben and his wife TaRita raise their children, Brodie, Eden and Selah in the Pearl River community.”

Reeves’ appointees with join those of House Speaker Philip Gunn and Lieutenant Governor Delbert Hosemann, who were selected last week.

The full roster of the Mississippi Flag Commission is: